The Society of Systematic Biologists (SSB) prohibits all forms of discrimination, harassment, and retaliation at Society meetings. Behavior that undermines the integrity of intellectual discourse and interactions will not be tolerated at Society meetings.

The fifth SSB standalone meeting will be held on the campus of the Universidad Nacional Autónoma de México (UNAM) in México City, México on Jan. 14th and 15th, 2023. Pre-meeting workshops will be held on Jan. 12th and 13th. More details coming soon! 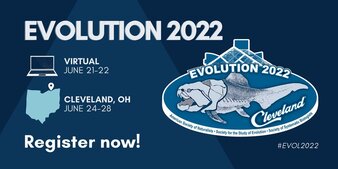 The annual Evolution meetings were held both online (June 21-22, 2022) and in person in Cleveland, OH (June 24-28, 2022), in conjunction with the Society for the Study of Evolution (SSE) and the American Society of Naturalists (ASN). Post-conference registration ($20) is still open for those who want to view recorded talks until the end of 2022!

Highlights of the meeting for SSB members included:

Due to the ongoing pandemic, the 2021 Evolution meetings were held entirely online. The full meeting program is available here. Plenary talks from the meeting, including the SSB Presidential Address by Past President Erika Edwards and the IDEA Award Lecture by Rich Kliman and former SSB President Scott Edwards, are available to watch here.

The Society of Systematic Biologists held its fourth standalone meeting in January 2020 in Gainesville, FL.

This is our annual joint meeting, held in collaboration with the Society for the Study of Evolution (SSE) and the American Society of Naturalists (ASN). More information about this meeting is here. You can see many recorded talks here.
2017 SSB Standalone Meeting (Baton Rouge, LA)